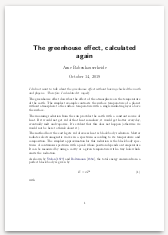 I did not want to talk about the greenhouse effect without having checked the math and physics. Therefore I calculated it myself.

If you want all links to work, read the the PDF-version.

The incoming radiation from the Sun provides the earth with a constant source of energy. If it would not get rid of that energy somehow, it would get hotter everyday, eventually melt and vaporize. It’s evident that this does not happen (otherwise we would not be here to think about it).

As shown by \citet{Stefan1879} and \citet{Boltzmann1884}, the total energy emission from a perfect black body (a body which absorbs all incoming radiation) per unit area is given by 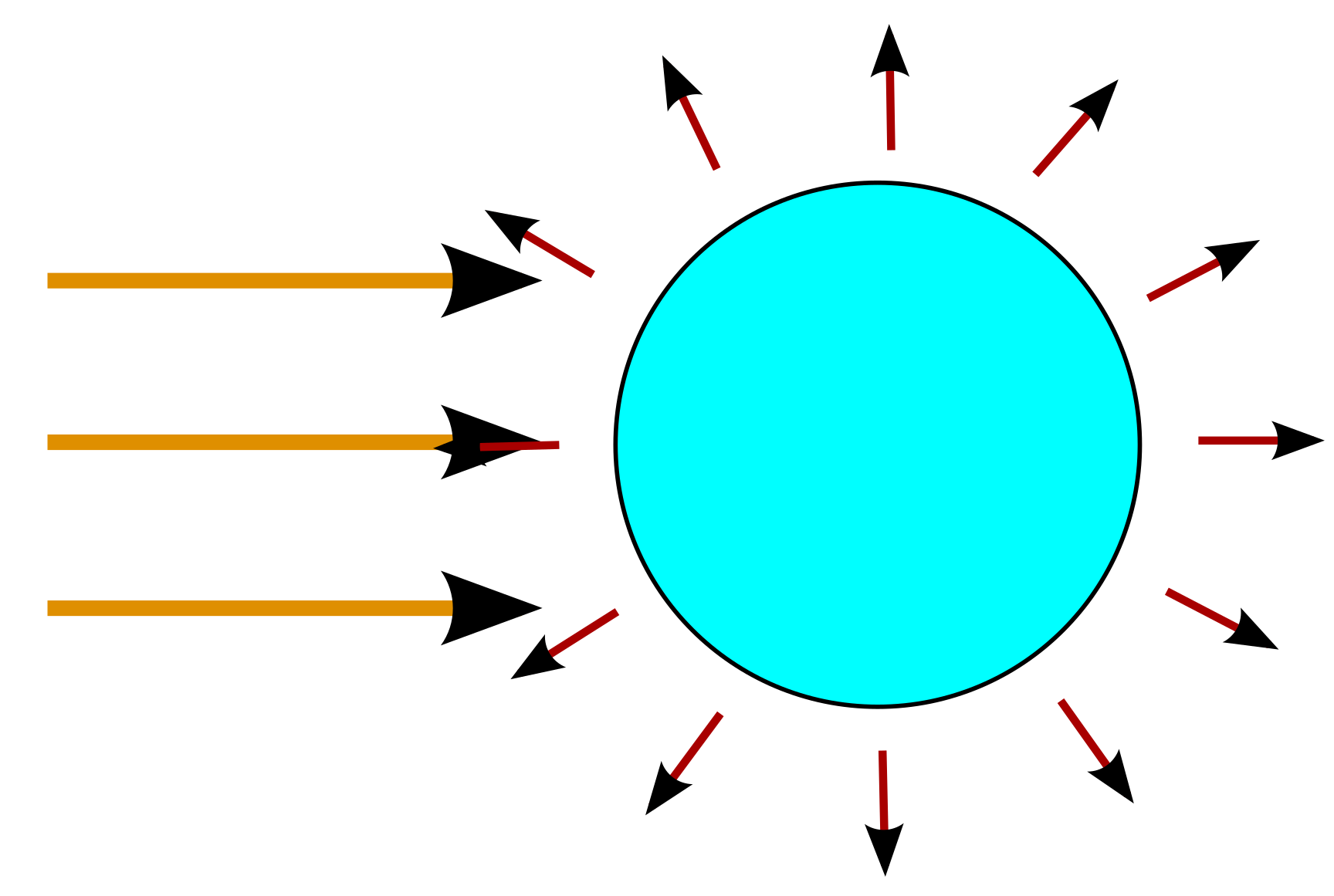 This gives an average surface temperature of

for a perfectly black Earth without atmosphere.

Historically the next step after the black body estimation was to take the albedo into account: The amount of incoming radiation reflected directly back into space.

If we take into account that the Earth surface and clouds reflect roughly 30% of the visible light back into space, the Earth only receives roughly 70% of the energy which it needs to radiate back. For details, see \citet{Muller2012} and \citet{Muller2013}.1 The equilibrium temperature changes to 255 Kelvin, which is just about -18 °C. Note that changing the albedo by 1 percent point (to 29% or 31%) would change the temperature by roughly 1 K.

There are small additional factors in play:

But with these we’re still roughly 30 Kelvin away from actual temperatures. These are reached through absorption and radial re-radiation of outgoing energy, which effectively provides the Earth with insulation, most effective in the infrared.

This is what is typically called the greenhouse effect: Infra-red emissions by the Earth are absorbed by greenhouse gases in the atmosphere, so the Earth needs to be warmer to get rid of the same amount of received energy.

Greenhouse gases have a net effect on the temperature, because the outgoing radiation mostly consists of thermal infrared light (TIR), while the incoming radiation mostly consists of near infrared (NIR) visible (VIS) and ultraviolet (UV) light. Let’s take the oldest account of this absorption: \citet[“On the Influence of Carbonic Acid in the Air upon the Temperature of the Ground”]{Arrhenius1896} describes different absorption of moonlight depending on the wavelength of the light. Half this light absorbed in the atmosphere is radiated outwards, the other half inwards.

For the actual calculation, we use more recent results: \citet[„The natural greenhouse effect of atmospheric oxygen (O2)and nitrogen (N2)“]{Hoepfner2012}. They take into account the structure of the atmosphere by building on the well-established Karlsruhe Optimized and Precise Radiative transfer Algorithm (KOPRA).

We get 285.74 K as equilibrium temperature. That’s around 12.6°C, so now we’re just 1.4 Kelvin away from the actual \(14 ^\circ C\) for the base period 1961-90 \citep{Jones1999,Rayner2006}. There are still effects missing in the calculations, but the intention of this guide is not to create a new climate model, but to show the fundamental physical effects. Remember also that changing the surface albedo by 1 percent point (to 29% or 31%) would change the temperature by roughly 1 K, so getting within less than 2 °C of the measured temperature is already pretty good. Going further would require a much stricter treatment of surface albedo that goes into too much detail for an article.

Therefore we’ll round this up with an important test that is only weakly affected by the surface albedo:

What happens if we increase the absorption by CO\(_2\)? Do we see global warming?

For this test the result is already close enough to the measured temperature that we can take the difference between values with different parameters to get the effect of these parameters and remove biases which are present in both values.

To calculate global warming due to doubled CO₂, we cannot just double the absorption, because the absorption bands get saturated. The \citet[IPCC working group 1 (physical science basis)]{IPCCRadiativeForcingMyhre2013} gives the increase in radiative forcing due to increased CO\(_2\) levels from the 1950 concentrations of about 310 ppm to the 2010 concentrations of 390 ppm as about 1.2 W/m\(^2\).2

So this calculation from basics yields an increase of the equilibrium temperature by 0.57 °C.

This is a bit lower than the increase of 0.65 K to 0.75 K seen in the global temperature records by the Berkeley Earth project,4 and close to the 0.6 to 0.8 K increase shown in the Global (NH+SH)/2 temperature given by HadCRUT4 by the Met Office Hadley Centre by the National Meteorological Service of the United Kingdom.5 But for a calculation from basic principles, that’s pretty good.

So we can conclude that actual measurements match this physical explanation of global warming due to the greenhouse effect — or more exactly: due to increased absorption of infrared radiation by greenhouse gases, with the biggest effect due to CO\(_2\).

The source of climate-active human carbon emissions which influences the CO\(_2\) content of the atmosphere is mostly burning of fossil fuel which is taken from the crust of the Earth and introduced into the carbon cycle. This is what changes the CO\(_2\) concentration.

And with this, we are done.

Please reduce your carbon emissions and become active to get politicians to action on a national and global scale. We’re cutting the branch we live on.

If you want more details, have a look at the IPCC reports. Best start with the executive summary and then go into the details you’re most interested in:

An explanation how humans increase the CO₂-concentration of the atmosphere is available in my presentation The carbon cycle: https://www.draketo.de/licht/physik/kohlenstoffkreislauf-carbon-cycle

And if you want my best estimate of our current situation, have a look at the article Two visions of our future: https://www.draketo.de/english/politics/roll-a-die

You can check the albedo for several different spectral regions at http://www.globalbedo.org/

We’re only going to 1950 and not back to 1850, because the temperature data at 1850 would mix in the effect of the declining little ice age.

Berkeley Earth provides a reevaluation of all the surface measurements without complex models.

HadCRUT4 combines sea surface temperature data from the Hadley Centre of the UK Met Office and the land surface air temperature records compiled by the Climatic Research Unit (CRU) of the University of East Anglia.

‹ Thanks for all the fish nach oben comment on scientific consensus: distorting a debate to hide the majority view ›