Advertisers threatened me on twitter for ridiculing their misleading ad

Today advertisers answered a tweet with a link to a story about the possibility to steal fingerprints remotely from Android phones with a blatant advertisement for their “superior” “proprietary” technology. When I ridiculed their advertisement, they threatened me. Let’s call them colortext and their brand #slowblood.12

I was annoyed at the ad, but I decided to answer with a smile:

(Tech) cannot be compromised or recreated unlike fingerprints.

And that’s quite a claim, so it just called for a counter:

2017: CCC hackers log into Merkelphone with a 30€ bioprint of remotely copied #slowblood data.3

you get snide remarks for your blatant self-advertisement of proprietary tech.

…and for “can’t be compromised” ← that is a HUGE claim.

to which they first answered with a twinkle

but after I replied

or was this an offer to send the hackers your security system so they can test it?

…(in that case I would take back my criticism)

they went on to threaten me:

You are tweeting lies and using our trademark without consent.

I felt a sudden pang of fear. Still I answered

[…] are you threatening me for using the same hashtag as you?

But despite the irony in the text my heart was thumping hard. That threat is a serious one. I reported it to twitter: 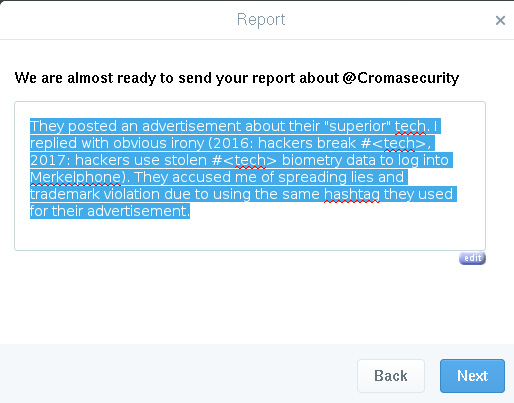 A few minutes later their tweets were gone — but I had expected that and taken screenshots. I’m writing about it, because I consider their actions unacceptable behavior - and because my heartbeat isn’t completely back to normal yet. Their harassment works, so they have to be called out for it.

Note: Different from the rest of my page this image is not GPL licensed because it contains text from them as proof of their actions. Their individual lines do not constituate a creative effort, but the combined text might reach the threshold of intentional creative [inappropriate word omitted].

In notification view which includes a few additional tweets (dear twitter, this is a bug!):

‹ ACTA horror - what can we do? nach oben Amarok - context on music - yahoo comes a tiny bit too late ›