Attackers can still limit the convergence of the network towards a reproduction of the small world network, but since we know that Opennet works quite well with 30% backoff, this limited convergence should suffice for efficient routing. 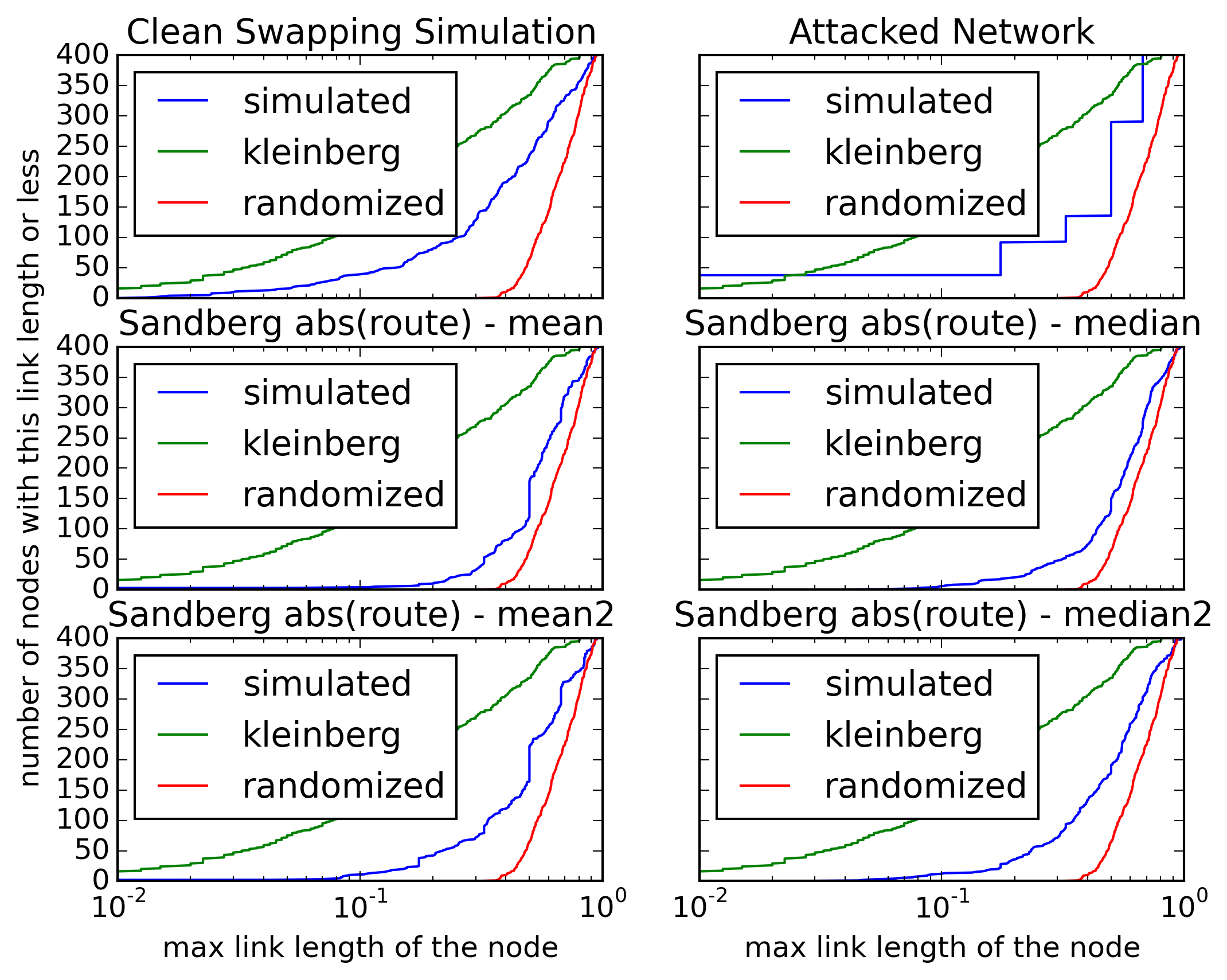 The fix does not need to know the size of the network. The only global information it needs is routing to random locations.

In this mail I first describe simulator and Pitch Black Attack. Afterwards I describe the fix. The fix was originally proposed by Oskar Sandberg. He did all the hard work, I just describe it here. (because that’s what most people really want ☺)

These show that the fix prevents complete fracturing of the keyspace: It recreates the short connections.

Most of the simulation is the work of Michael Grube. I just fixed a small bug.

The network starts with a random network and then optimizes it — either with clean swapping or under attack without and with different countermeasures.

To run the simulation, run

You need pylab and networkx (links are in README.md).

The Pitch Black Attack (the problem)

Optimizing the network with swapping works pretty well without attacks (within the mathematical limits1) — as shown in the simulation ("clean swapping network"). But this can currently be broken easily, even by a single attacker, using the Pitch Black Attack.2

Normally that’s no problem: The probability that this trust is violated is just the proportion of attackers in the network. So some swapping will wrong, but this will only happen rarely.

There is one lasting effect however: If node B always hands out the same location when swapping, this location will stay in the network indefinitely and former location of node A will be lost. This is slow, only one key can be killed per swapping, but highly effective.

Using the Pitch Black Attack, attackers can remove selected locations From the network (which allows for censorship by making selected files with known keys inaccessible, because nodes with their content change to locations which won’t be searched for this content).

The fix for this has been pending since 2008 because “We have solutions for this but they are still being tested.” (https://freenetproject.org/about.html#papers). I consider this testing to be done with this email. The fix works (described as follows).

To fix the Pitch Black Attack nodes route to a random location and check the distance of the closest node they can reach. If this distance is much larger than expected, they consider the network to be under attack and switch to this location to fill the gap they found.

The simulated algorithm only uses the estimated number of peers (also known as outdegree), the distance to direct peers and actual routing. It does not need the size of the network.

The number of peers is used to calculate the expected distance to a location in a randomly structured network. More exactly: The mean distance plus two standard deviations (97.5% of random routes will find a shorter distance than this). Let’s call this expected random distance range d_er. As far as I can reconstruct it, this distance was calculated by Oskar using statistics. I just use brute force, as shown in https://github.com/ArneBab/pbsim/blob/master/bruteforcemindist.py

This is the magic number 0.037. If you choose a set of six random locations in the circular keyspace [0..1) repeatedly and stop when the closest of these locations isn’t closer to a target than on the previous try, and you re-run this experiment repeatedly, then 95% of the results will be closer than 0.037. It’s the 95% limit of the distance to a target in a random network with outdegree 6.

Now it calculates the mean distance to its direct peers. Let’s call this d_mean

If the distance d minus the mean distance to the peers d_mean is larger than the expected random distance range d_er, the node assumes that the random location l is within a gap. Instead of starting a swap request, it switches to this tested location l.

d - d_mean compares the routing result with the distribution of direct peers. If the gap is bigger than the mean distance to the peers, it might be a real gap, purely from local information.

During experimentation I found that using mean peer distance means that nodes with more long-distance connections are less likely to detect a gap. An attacker might be able to segment the network so that every node has a few long-distance connections to prevent detection of gaps. I tried to fix this using the median distance to peers instead of the mean distance, since the median is less sensitive to outliers.

This was the most effective adjustment, but I need help from someone with deeper knowledge about network statistics to test this.

If the constant minimum distance for random networks (d_er) should prove problematic, we can reduce the value of d_er by doing two routing tries with different targets and check the shorter of the two distances but switch to the target with the larger distance. d_er would then for example be only around 0.02 instead of 0.037). But for this the simulation results have been unclear.

Update: Reinsertion is not needed, because a node which swaps to a random location will very likely swap back to a location closer to its neighbors within the next few swapping operations.

If a node changes its location by a large distance, this means that the content it holds cannot be found anymore. To fix this, it needs to re-insert all content in its store.

This is no large problem with basic swapping, because there the locations should stabilize, changing only in small ways. In case of an attack, it becomes important, though.

While it sounds expensive to re-insert all content in the store, it should not actually cost too much, since we can assume that most peers of the node will be close to its old location. So it could simply insert the content in its store with a HTL around 2 and still be confident to reach the right nodes.

This solution mitigates the Pitch Black Attack with moderate cost. Under attack the network no longer converges completely, but it still reaches a more optimized state of which I would expect that it suffices for routing.

It would be great to have more math on this, but I think it’s already ready for implementation.

‹ Lots of site uploads into freenet nach oben News of the day — and using Freenet as decentralized, pseudonymous communication backend for applications ›