I finally got the Freenet junit testsuite to run on Gentoo 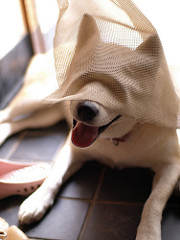 For years I developed Freenet partially blindfolded, because I could not get the tests to actually run on my Gentoo box.

As of today, that’s finally over: The testsuite runs successfully. My setup is still unclean, but it finally works. No more asking other contributors to run the tests for me.

Simple daemon with start-stop-daemon and runit

How to fix a bug, using the example of Quod Libet empty panes on Gentoo GNU/Linux (bug solving process)

For a few days now my Quod Libet has been broken, showing only empty space instead of information panes. 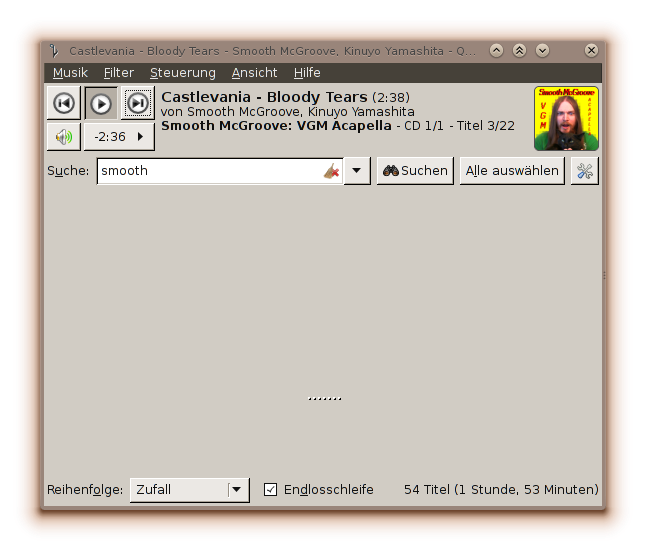 I investigated halfheartedly, but did not find the cause with quick googling. Today I decided to change that. I document my path here, because I did not yet write about how I actually tackle problems like these - and I think I would have profited from having a writeup like this when I started, instead of having to learn it by trial-and-error.

Update: Quodlibet 2.6.3 is now in the Gentoo portage tree - using my ebuild. The update works seamlessly. So to get your Quodlibet 2.5 running again, just call emerge =media-sound/quodlibet-2.6.3 =media-plugins/quodlibet-plugins-2.6.3. Happy Hacking!

Solution for the impatient: Update to Quod Libet 2.5.1. In Gentoo that’s easy.

systemd is a new way to start a Linux-system with the expressed goal of rethinking all of init. These are my top 5 gripes with it. (»skip the updates«)

Update (2019): I now use GNU Guix with shepherd. That’s one more better option than systemd. In that it joins OpenRC and many others.

Update (2016-09-28): Systemd is an exploit kit just waiting to be activated. And once it is active, only those who wrote it will be able to defuse it — and check whether it is defused. And it is starting: How to crash systemd in one tweet? Alternatives? Use OpenRC for system services. That’s simple and fast and full-featured with minimal fuss. Use runit for process supervision of user-services and system-services alike.

Update (2014-12-11): One more deconstruction of the strategies around systemd: systemd: Assumptions, Bullying, Consent. It shows that the attitude which forms the root of the dangers of systemd is even visible in its very source code.

Update (2014-11-19): The Debian General Resolution resulted in “We do not need a general resolution to decide systemd”. The vote page provides detailed results and statistics. Ian Jackson resigned from the Technical Committee: “And, speaking personally, I am exhausted.”

Update (2014-10-16): There is now a vote on a General Resolution in Debian for preserving the ability to switch init systems. It is linked under “Are there better solutions […]?” on the site Shall we fork Debian™? :^|.

Update (2014-10-07): Lennart hetzt (german) describes the rhetoric tricks used by Lennart Poettering to make people forget that he is a major part of the communication problems we’re facing at times - and to hide valid technical, practical, pragmatical, political und strategical criticism of Systemd.

Update (2014-09-24): boycott systemd calls for action with 12 reasons against systemd: “We do recognize the need for a new init system in the 21st century, but systemd is not it.”

Update (2014-04-03): And now we have Julian Assange warning about NSA control over Debian, Theodore Ts’o, maintainer of ext4, complaining about incomprehensible systemd, and Linus Torvalds (you know him, right?) rant against disrupting behavior from systemd developers, going as far as refusing to merge anything from the developers in question into Linux. Should I say “I said so”? Maybe not. After all, I came pretty late. Others saw this trend 2 years before I even knew about systemd. Can we really assume that there won’t be intentional disruption? Maybe I should look for solutions. It could be a good idea to start having community-paid developers.

Update (2014-02-18): An email to the mailing list of the technical committee of debian summarized the strategic implications of systemd-adoption for Debian and RedHat. It was called conspiracy theory right away, but the gains for RedHat are obvious: RedHat would be dumb not to try this. And only a fool trusts a company. Even the best company has to put money before ethics.

Update (2013-11-20): Further reading shows that people have been giving arguments from my list since 2011, and they got answers in the range of “anything short of systemd is dumb”, “this cannot work” (while OpenRC clearly shows that it works well), requests for implementation details without justification and insults and further insults; but the arguments stayed valid for the last 2 years. That does not look like systemd has a friendly community - or is healthy for distributions adopting it. Also an OpenRC developer wrote the best rebuttal of systemd propaganda I read so far: “Alternativlos”: Systemd propaganda (note, though, that I am biased against systemd due to problems I had in the past with udev kernel-dependencies)

So now you can install it in Gentoo with a simple emerge kde-misc/pyrad. 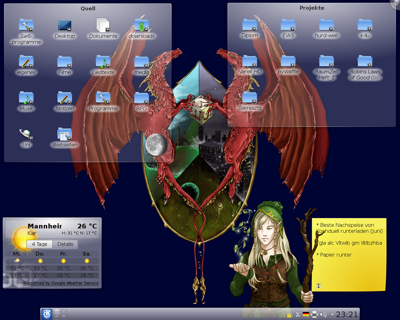 For a long time it bugged me, that eix uses a seperate database which I need to keep up to date. But no longer: With pkgcore as fast as it is today, I set up pquery to replace eix.

The result is pix:

To keep my Gentoo up to date, I use daily and weekly update scripts which also always run revdep-rebuild after the saturday night update :)

My daily update is via pkgcore to pull in all important security updates:

That pulls in the Gentoo Linux Security Advisories - important updates with mostly short compile time. (You need pkgcore for that: "emerge pkgcore")

Also I use two cron scripts. 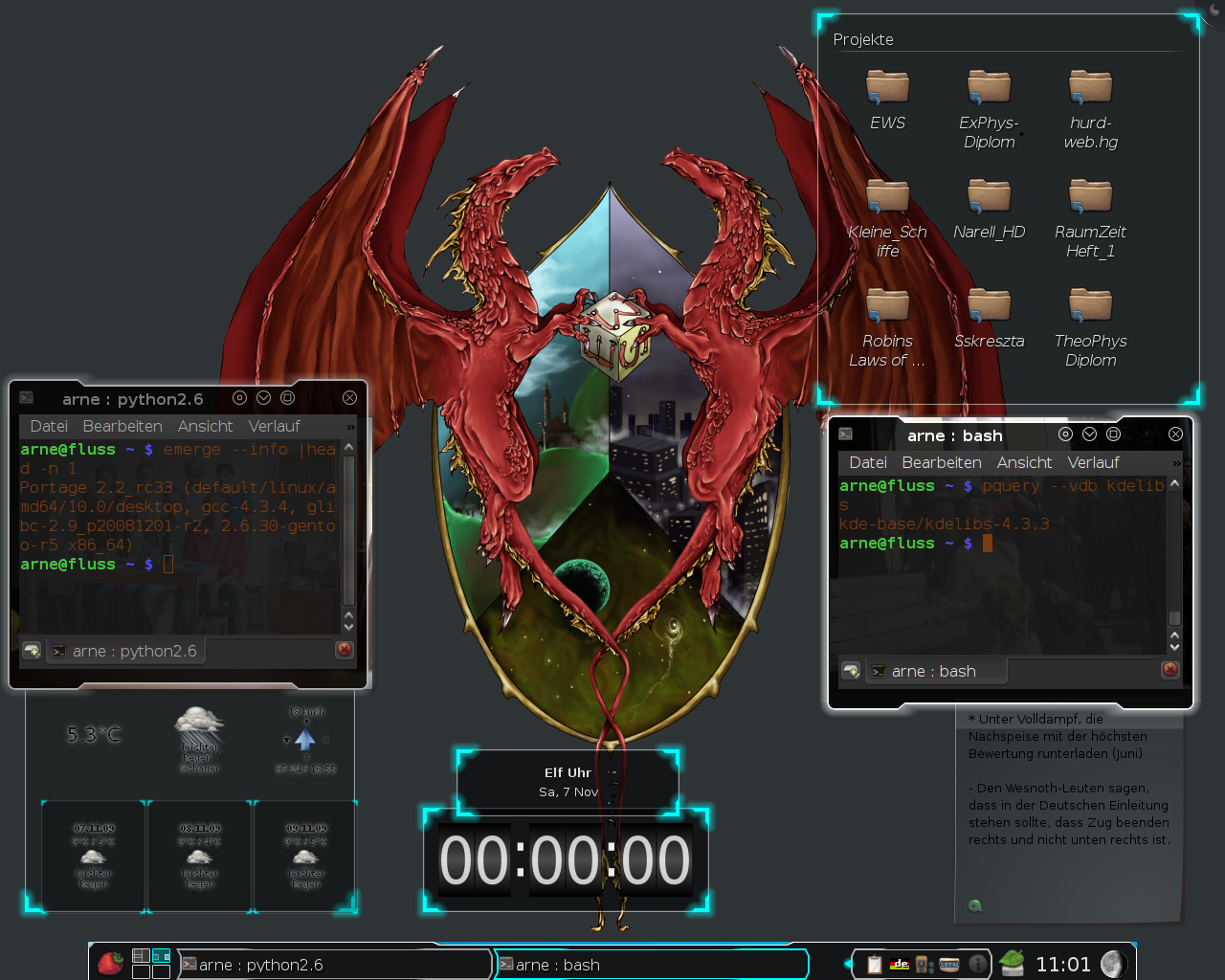 For me, Gentoo is about *convenient* choice

It's often said, that Gentoo is all about choice, but that doesn't quite fit what it is for me.

After all, the highest ability to choose is Linux from scratch and I can have any amount of choice in every distribution by just going deep enough (and investing enough time).

What really distinguishes Gentoo for me is that it makes it convenient to choose.

Since we all have a limited time budget, many of us only have real freedom to choose, because we use Gentoo which makes it possible to choose with the distribution-tools.

We (nelchael and me) just finished a live ebuild for Mercurial which allows to conveniently track the main (mpm) repo of Mercurial in Gentoo.

To use the ebuild, just add

to your package.keywords and emerge mercurial (again).

(All this is) Gentoo for me

Listen to the song: ogg
This recording is part of the music podcast singing in the winds of time.

Refrain:
I build my kernel and I strip it down,
my programs only do what I need
the tree is at my very core
it's my whole world and it is my seed.